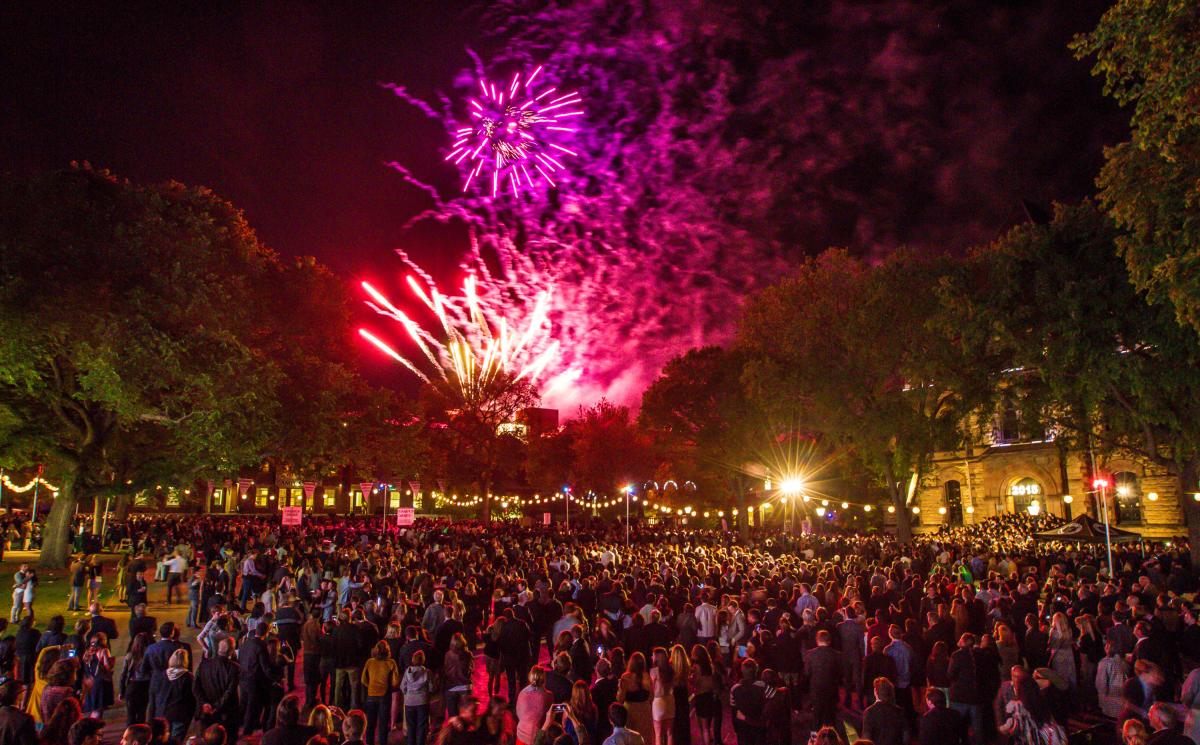 To see all press releases generated by Brown relating to the 250th Anniversary, please see this page.

Over 444 days, thousands of revelers from around the world came together to celebrate Brown’s 250-year history. Local community members, alumni, students, parents and friends converged on College Hill and gathered on every continent to mark the occasion.  They reflected on the University’s rich past, while also examining Brown of today and tomorrow.  Centuries in the Making shares the scope and depth of the celebration.

From the first events on March 7, 2014, it all came to a close on May 24, 2015 at Brown's 247th Commencement. In a rare break from tradition, President Christina Paxson took a moment during the University Ceremony to reflect on the end of the anniversary celebration.

“In myriad ways over the past 15 months, we have reflected on our past, considered the University of today and challenged ourselves to imagine Brown’s future,” Paxson said. “From the start, we set a tone that was uniquely Brown and that spirit has continued throughout the anniversary...we have showcased the best of Brown and the diversity that thrives in the Brown community and defines the Brown difference.”

A Celebration for the Ages

Brown kicked off its semiquincentenary in March of 2014 with a weekend of events that brought thousands to campus.

Middle schoolers from more than 30 local schools arrived on campus early that Friday for a day of discovery and academic exploration that included robot demonstrations, playing in a virtual reality Cave, and lunch with Brown students in the "Ratty" - one of the University's dining facilities.

Notable alumni, including World Bank President Jim Yong Kim and U.S. Secretary of Labor Thomas Perez, returned to campus for lectures and forums, while departments across campus opened their doors to the public to offer demonstrations about their scholarly work. The weekend also included a Friday night party complete with a 600-pound cake, fireworks above University Hall and a robust array of student performances, including the Brown University Wind Symphony's concert inclusive of the world premiere of Brownian Motion by Patrick Zimmerli, a work commissioned in celebration of the anniversary.

Later in the Spring of 2014, The Brown Reader: 50 Writers Remember College Hill, was published; a collection of essays, comics, and poems by alumni writers, poets, and artists, ranging in tone from the serious to the poignant.

The book was one of many ways that the 250th Steering Committee strived to bring alumni into the celebration and promote the sense of inclusivity that remained one of the main goals of planning the anniversary events.

From billboards along the highways, to advertisements at T. F. Greene airport, to the banners that lined the streets around College Hill, it was all about spreading the spirit of celebration and inviting as many people as possible, from the Brown community and beyond, to take part.

And the anniversary extended well beyond Providence, with more than 100 alumni clubs and class communities from around the world and all seven continents holding “Birthday in a Box” gatherings, Brown Reader events, community service programs, faculty lectures and more.  Alumni communities as far away as Asia and Australia, and even a group of faculty members doing research in Antarctica, received packages complete with 250+ decorations and ideas for ways to celebrate the University’s founding.

While much of the 250th celebration focused on the present and future of Brown, the unique and distinct history of the University was a major focus as well.

The Brown 250+ website launched in the spring of 2014 complete with stories from Brown’s history and an interactive timeline that starts prior to the University's founding and even includes the oldest known video of Brown’s Commencement ceremony.

The 250th website is also filled with a compilation of anniversary-inspired social media engagement from the past 15 months, a significant initiative as well as a modern-day record that will no doubt be a significant part of the next chapter in Brown’s history.

History was quite literally on display several times throughout the duration of the 250th celebration, with the opening of several exhibitions, including “The Lost Museum,” put together by public humanities students to bring back to life Brown’s Museum of Natural History and Anthropology and its founder John Whipple Potter Jenks, as well as the Haffenreffer Museum’s exhibition “In Deo Speramus: The Symbols and Ceremonies of Brown University.”

It was important to the Steering Committee that an honest and accurate account of Brown’s history be presented, with plenty of the celebratory high points, but also inclusive of the challenges that have faced the University over the years.

In September 2014, as part of the Fall Celebration, hundreds assembled on the Front Green for the dedication of the Slavery Memorial, a work by the American sculptor Martin Puryear that was commissioned on the recommendation of the 2006 final report of the Steering Committee on Slavery and Justice. The report was an investigation of the University’s historical relationship to slavery and the transatlantic slave trade.

The following month, the University dedicated the new home of the Center for the Study of Slavery and Justice which hosted an inaugural exhibition titled “Black Experiences at Brown.”

Another exhibition and weekend of events, hosted by the Pembroke Center for Teaching and Research on Women, looked back on Louise Lamphere v. Brown University, the landmark class action case that in 1975 charged Brown with sex discrimination and set in motion a chain of events that changed the University. Events included an exhibition, panel discussion, and symposium. Louise Lamphere, a former member of the Brown faculty, was awarded an honorary doctorate at this year’s Commencement ceremony.

Also in May, Ted Widmer, author and historian, completed Brown: The History of an Idea, a photo-filled new history of Brown that chronicles the University’s origins and explores the evolution from a small college to a global institution.

Excellence, both inside and outside the classroom, was showcased throughout the celebration in a variety of ways. Dozens of academic departments, and student and community groups were awarded grants to help fund anniversary-related events throughout the year. Those ranged from a Save The Bay tour of what Narragansett Bay and its shoreline would have looked like two and a half centuries ago, to the 50th anniversary celebration of the Brown-Tougaloo partnership in November 2014.

Beyond the classroom, efforts were made to include other campus groups, such as athletes, in the celebration. Each season, one men's and women's athletic team was given vintage-style uniforms to wear, while the history of the Brown Bear mascot and its traditions are chronicled on the 250th website.

The 250th celebration will live on in many ways.  Through the social media captured on the 250th website, the archival materials dug up and exhibited over the past 15 months, the memories of the local schoolchildren who came to campus. On June 11, 2015, an elm was planted on the College Green as a way to commemorate the celebration and to thank everyone — the staff, faculty, students, alumni, parents and community members — who helped make it all possible.

Perhaps most importantly though, now that the exhibits, events, performances and lectures have come to a close, the last firework has fizzled out and the last piece of cake consumed, Brown’s past, present and future will carry on most vividly in the minds and hearts of its students, which President Paxson reminded the audience in her remarks at this year’s Commencement.

“As you pursue your lives of usefulness and reputation, I hope the past 15 months have helped prepare you to do so with a deeper sense of pride and a fuller understanding of Brown’s history and of those who have journeyed the path before you.”

In the final moments of the 250th Anniversary, thousands were gathered on the College Green and were given a surprise at the end of the University Ceremony - the world premiere of Alma Mater 250, a modernized version of Brown’s Alma Mater. As well, the performance served as a final nod to the collaboration among constituencies that resonated throughout the anniversary.

Written by music department chair Butch Rovan and performed by just graduated Brown/Trinity MFA students, as well as the renowned Rhode Island based blues and swing revival big band Roomful of Blues, Alma Mater 250 was a spirited mingling of past, present and future, a fitting end to the 250th anniversary celebration.

Using the James Andrews DeWolf-penned lyrics from the original Alma Mater, Rovan updated the music for a more upbeat, blues-inflected sound that those familiar with the original version would still recognize. The original bridge, which begins “The happiest moments of life’s fleeting hours,” was replaced with three rap verses written and performed by undergraduate student Sebastian Otero '18.

“I always thought it would be neat to reinterpret the Alma Mater in a more modern way. When I began the project, I wanted it to be something that was uplifting and had a lot of energy and unconsciously I drifted toward something that was kind of r&b/gospel,” Rovan said, reflecting on the process of creating the piece. “I was so thrilled that I had a chance to do this. It was such a blast and amazing to be a part of bringing something like that to graduation and the 250th. The energy that these musicians and singers brought to it was incredible.”

As the verses of Alma Mater 250 passed over the College Green to close out Commencement and the 250th celebration, that sentiment was echoed one last time in Otero’s lyrics, only moments before Brown’s newest graduates stepped off the Green as they, and the University, moved into the next chapter of their histories:

“Was it all a dream?
The happiest moments of our lives under the shade of these trees
All the smiles in these memories pass quick like a summer breeze
Pass down traditions and give it to the homies”

Complete lyrics to the Alma Mater 250