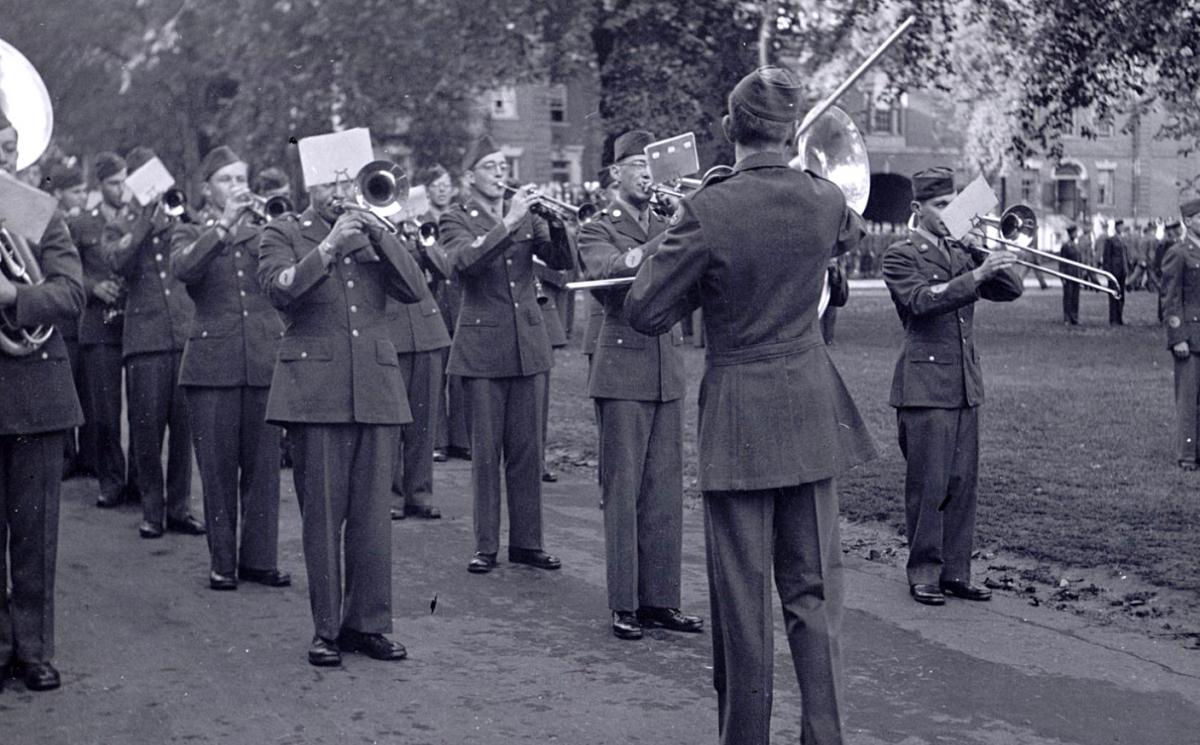 Two mushroom clouds filled the air of Hiroshima and Nagasaki, Japan. The atom bombs had exploded, and these cities were destroyed. The terrible sounds of war at last grew silent, and the jungle rot, the Bataan death march, the widespread malaria and the kamikaze attacks became history. After 33 months in the Pacific, Francis Gofton, milkman turned soldier, could give up his anti-aircraft artillery post.

In Europe, the war had ended earlier. No more news of the Battle of the Bulge, the bombing runs out of England, the long list of those killed or missing in action, the swastikas and Omaha Beach on D-Day. Abel Gonsalves was there on day one. Surrounded by blood and dead bodies, with half his company killed, he survived. It was time to go home. It was time, too, for the G.I.s who had been waiting their turn, fully trained in the ways of combat and ready for the initial invasion of Japan.

It was time to go home. And then, what? Years of youth had been torn away, but hard lessons had been learned. The boys had become men.

The potential for a new beginning for those returning home came in the form of the G.I. Bill of Rights. The government had passed a bill giving every honorably discharged serviceman a guarantee of funds for tuition and books while attending acceptable schools. The number of payments would be in proportion to the length of service. Most were eligible for an entire four-year program. 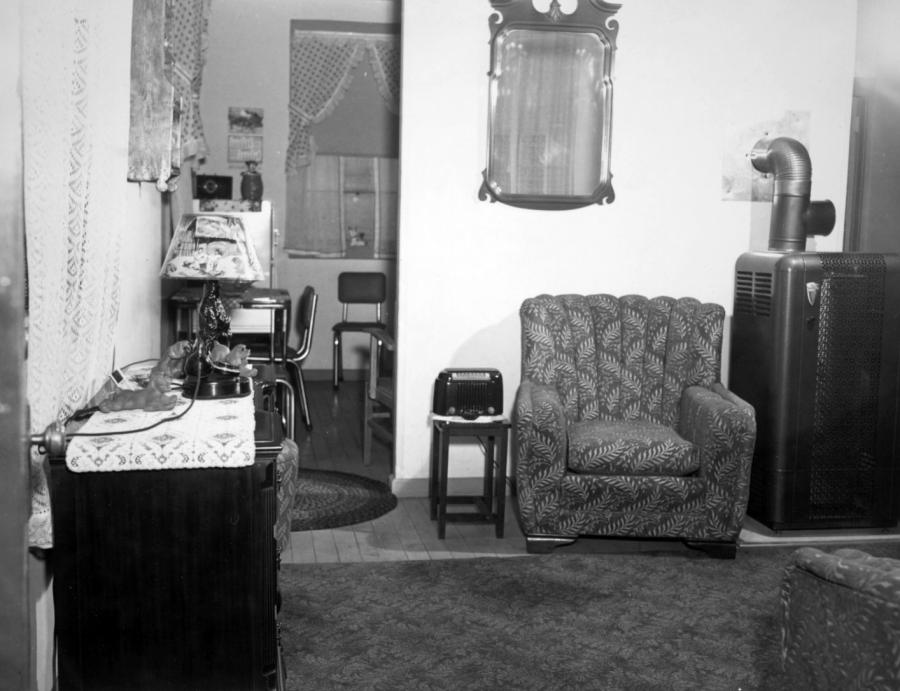 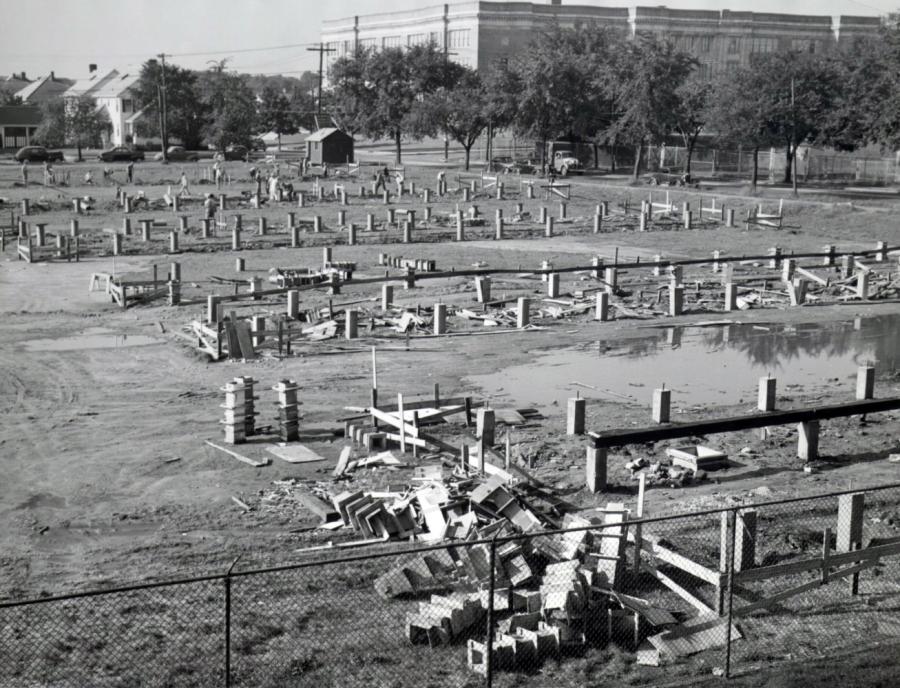 Cement posts being installed on the corner of Elmgrove Ave. and Sessions St., c.1946 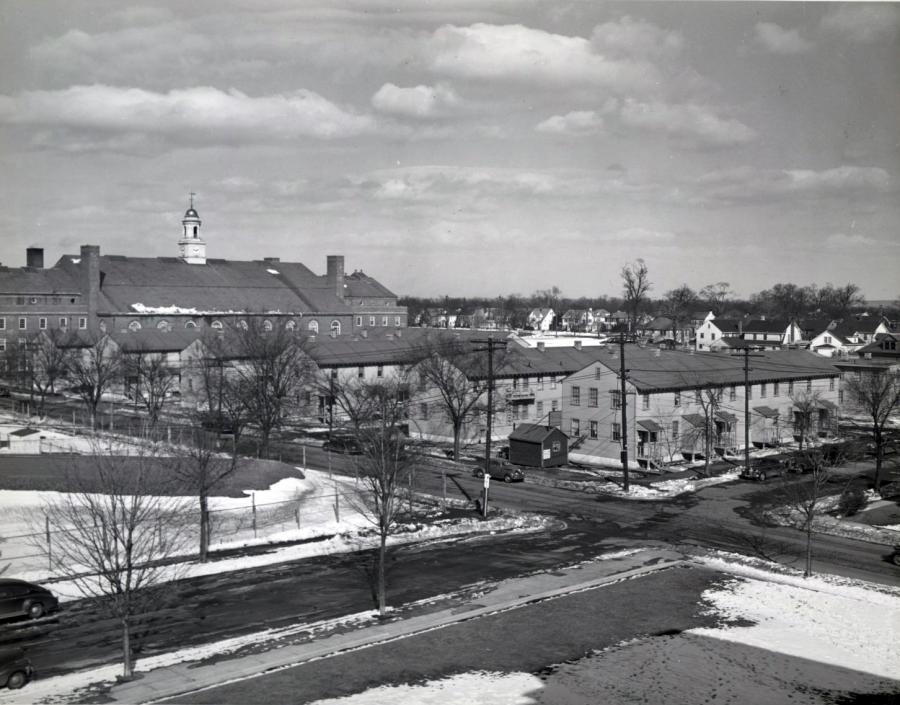 Prior to the end of hostilities, President Wriston, with Vice President Arnold, worked out a unique experiment to help veterans go to college. In their forward thinking they realized that many of these men could not dream of attending a university. There were those who, having had to work, had not taken the necessary preparatory courses in high school. There were those who, in the puerility of youth, had not worried about grades and had not done well. Some had never graduated from high school.

President Wriston theorized that the formulae for successful entrance to higher education had changed. Most of the returning veterans had matured greatly during military service, and he believed strongly that Brown had a responsibility to these people. The G.I. Bill would provide the financial support, but, as yet, no institution had made its educational facilities accessible to these veterans.

Wriston and Arnold presented their plan to many educational institutions in Rhode Island and Massachusetts so as to broaden the numbers that could be enrolled. Their idea was not well received, and in fact, they heard comments like, “This plan is a disaster waiting to happen.” Brown’s officers and Corporation resolved to move forward, determined to make this unique experiment a success. And so, the Veterans Extension Division was born.

The formula for admissions acceptance was governed by five criteria: performance on a Scholastic Aptitude Test, with the norm falling somewhat below that required by the regular college; high school transcripts; headmasters’ and principals’ comments and recommendations; personal references; and a personal interview with an admissions officer focusing on maturity, an incentive to learn and the degree of ambition held by the applicant.

The program was to begin in September 1946. The Corporation voted to change its basic University policy, so that the Veterans Extension Division now had the authority to grant regular academic credits for quality work, a value not attached to previous extension work at the college.[1]

Announcements were sent to all local media, and pamphlets were distributed. Approximately 1400 applications poured in, and approximately 486 veterans enrolled in the first semester. The average age was 23, six years older than the usual entering freshman. Almost all of the students selected opted for a degree: 290 for an AB, 154 for ScB in Engineering and 28 for an ScB in Chemistry. Almost all took a full four-course load.

According to Sam Arnold, “The group chosen was made up of applicants who did not meet all formal requirements but had academic and military records which gave us reasons to believe they might make it, if given the opportunity.”

Most of these veterans had seen overseas duty, many were recipients of purple hearts, combat infantry badges, air medals, Bronze Stars, unit citations, Distinguished Flying Crosses and a Belgian Fouragerre. The group was an interesting cross section, with three women, the son of an admiral and a professional boxer among them. There was a ten star campaign veteran, sons of Brown alumni and a general’s son. Included was a man who had had no formal education but had passed a high school equivalency test and had an IQ of 170. There was also a milkman who worked a regular delivery route starting at four a.m. His name was Francis Gofton.

Gofton had never thought he’d go to college. “I had no money, nothing. My personality and my life were changed by The Veterans’ College and Brown University.” Francis Gofton, the milkman turned scholar, graduated Phi Beta Kappa, went on to an MA at Harvard and became a teacher.

“The intangible aspects of the vet’s strong personality seem to result in an accomplishment beyond what might be predicted on the basis of his supposed capacity. In this somewhat unique group, the incentive to learn has become of prime importance…War had acted as a catalyst in maturing the vet, so that broader visions and perspectives have developed in most…Several years out of secondary school, the challenge is of some magnitude, and only through hard work could he realize success.”[2]

Vets were required to live off-campus. They were not allowed to participate in any of the school’s formal athletics, join fraternities, or engage in extracurricular activities. This was “A school without trimmings.”[3]

All educational facilities at Brown, however, including professors, courses, books and exams, were all part of the Veterans College. Classes began at 1:00 p.m. and continued with labs sometimes lasting well into the night. The program was to end after two years, and each student who achieved quality grades in all courses would automatically transfer to the regular school as a first semester junior with all rights and privileges offered at Brown.

Chosen to head up the Veterans Extension Division were James A. Cunningham, Class of 1941, and Vernon Alden, Class of 1945. They were assigned the tasks of admissions, faculty advisors, registrars, chaplains and “Wailing Wall keepers.”

Given the opportunity to refocus their lives, veterans arrived on campus with great passion and determination. Some comments from the professors:

“Their effort is feverish.”

“In all my years of teaching, I’ve never had a group argue in class the way they do.”

The records that these veterans rolled up were remarkable. In November, due to the program’s huge academic success, the Corporation changed the name to the Veterans College of Brown University. It was remarkable that at the end of only the first semester, 18 months earlier than expected, and due to their academic success, it was determined that 142 students be transferred to the University. Remaining in the Veterans College were then 290-second semester students and 163-first semester students.

The officials were astonished. The significance of these results was tremendous. Implied was the realization that the philosophy behind admissions policies for universities might need re-examining. Indications of a student’s success in college might not depend wholly on high school records and SAT scores. Their experiment designed to help war veterans might well have widespread repercussions.

On April 13, 1947, the New York Times called this plan for war veterans, “A unique experiment… proved successful at Brown University…The principle behind this was, in an educational sense, revolutionary.”

This brilliant and daring experiment opened doors to so much for those who probably would not have had this experience. They were made all the richer for the efforts in their behalf. Colleges and universities would do well to note the extraordinary results of this endeavor and the many important contributions to society made thereby. Perhaps, with more understanding and determination, our country’s leaders could endorse similar programs for people currently in need of help in refocusing and reshaping their lives. Arthur Miller said it best: “Attention must be paid.”

There were many whose lives were touched, and, indeed shaped by Henry Wriston’s brave experiment.