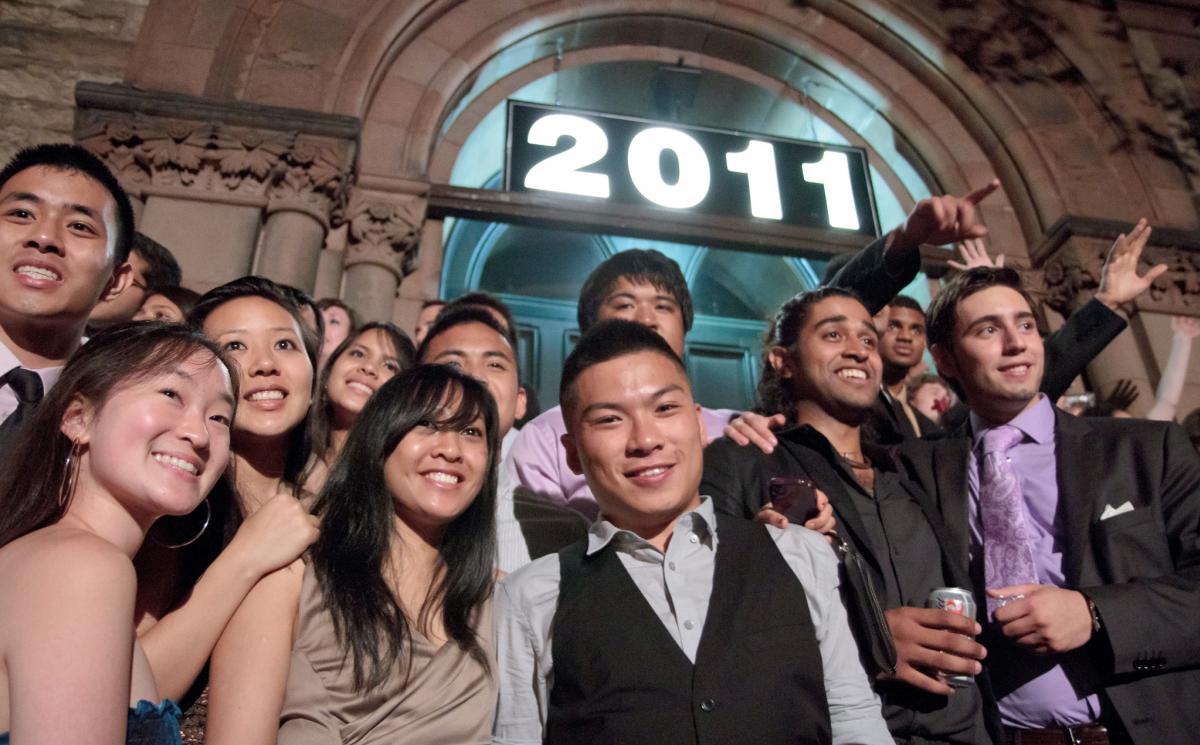 Brown's Campus Dance is, for many, the official kick-off to Commencement and Reunion Weekend, offering guests a chance for pure celebration. No speeches or ceremonies, just music, dancing, singing and time with family, friends and the larger Brown community in a ballroom under the stars.

Today’s Campus Dance traces its roots to the mid-nineteenth century. Commencement, then held in September, had long been a celebratory event, drawing graduates and their families as well as much of the surrounding Providence community. In 1856, seniors requested a Class Day, a chance to recognize the close of the term in June. Early Class Day celebrations included band concerts, orations, a class supper and a Senior Sing. By 1866, the musical and social aspects of the day had taken center stage, with “loud and cheerful strains of music echoing” and a promenade through the campus. In 1869, the now familiar paper lanterns first adorned the College Green and in 1870, Class Day joined a handful of other occasions when the windows of University Hall were illuminated by candles. By 1886, dancing was the primary feature of the Class Day revels and by the 1930s, the use of electric lights to spell out the year was part of the tradition.

During WWII, austerity tempered the celebration, with the dance held inside Sayles Hall, to avoid using precious lumber to construct an outdoor dance floor. Attendance was limited to those directly connected to Brown.  But the spirit changed after wartime...

“A raised platform the size of Sayles Hall will be built on the Green. The railing encircling the floor will be decorated with brown and white bunting and green holly...The trees of the science quadrangle will be illuminated with spotlights of blending colors. The other trees of lower campus will have green fluorescent lights reflecting their silhouettes. More than two hundred lanterns will be hung over the platform.”

–The Pembroke Record, June 11, 1946, on the spectacle of the first post-war Campus Dance

After a triumphant post-war return, interest in the day waned; the last Class Day was held in 1961. Campus Dance alone survived, as an element in the larger Commencement celebration. In the mid-twentieth century, invitations to the dance were extended to female Seniors as well, as previously they attended on the arm of their male counterparts. 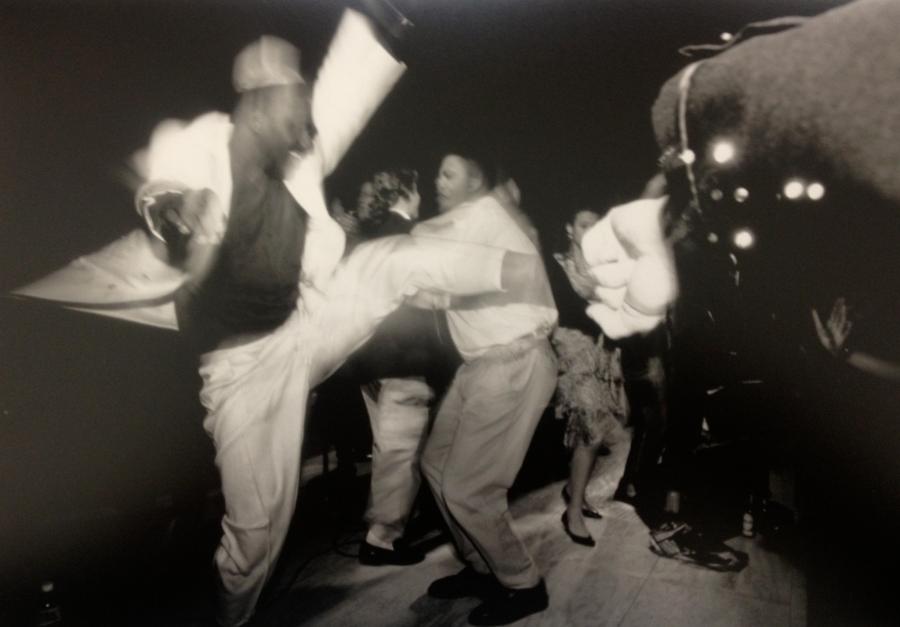 A man celebrates Campus Dance with an enthusiastic high kick. 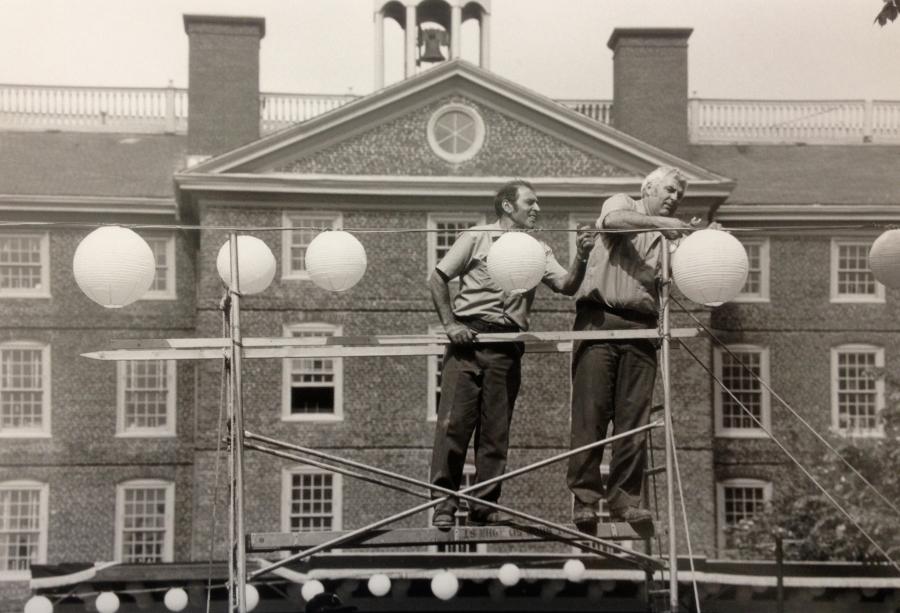 Two workers hang lanterns in preparation for Campus Dance against the backdrop of University Hall, 1986. 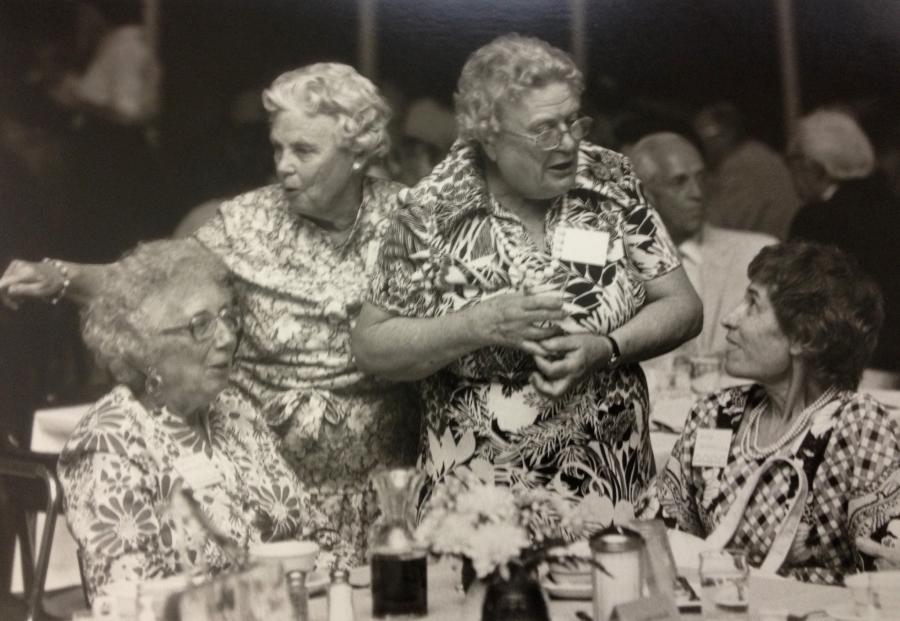 Alumnae return for the 1979 Campus Dance. 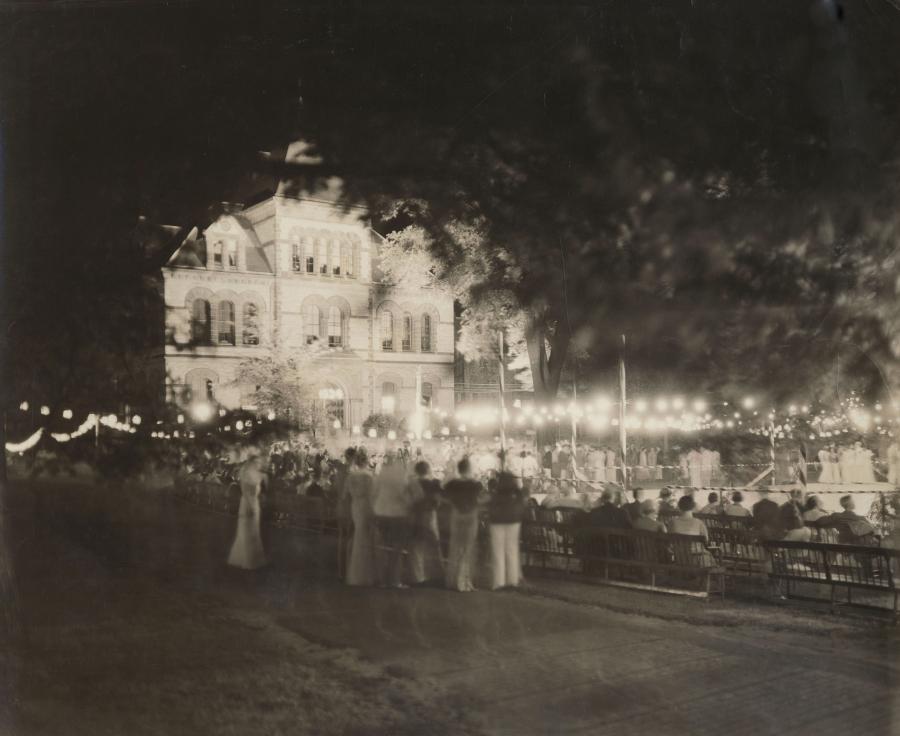 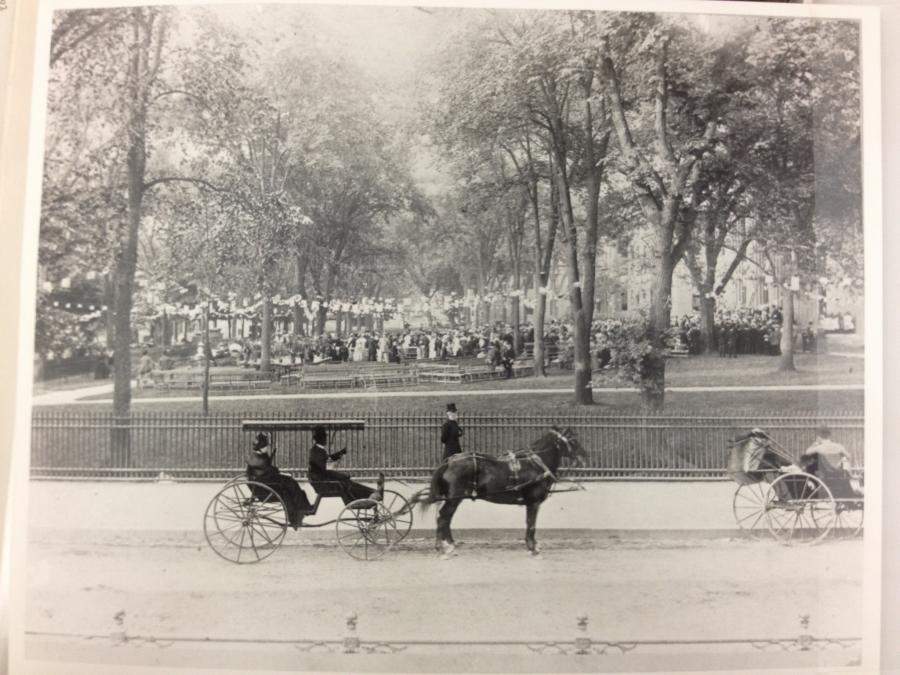 Class Day, 1886. Likely taking place on the Front Green, as the columns of Manning Hall are visible through the trees on the right. Passersby watch from horse-drawn carriages. This was the first year the senior reception of Commencement was a dance, the origin of Campus Dance. 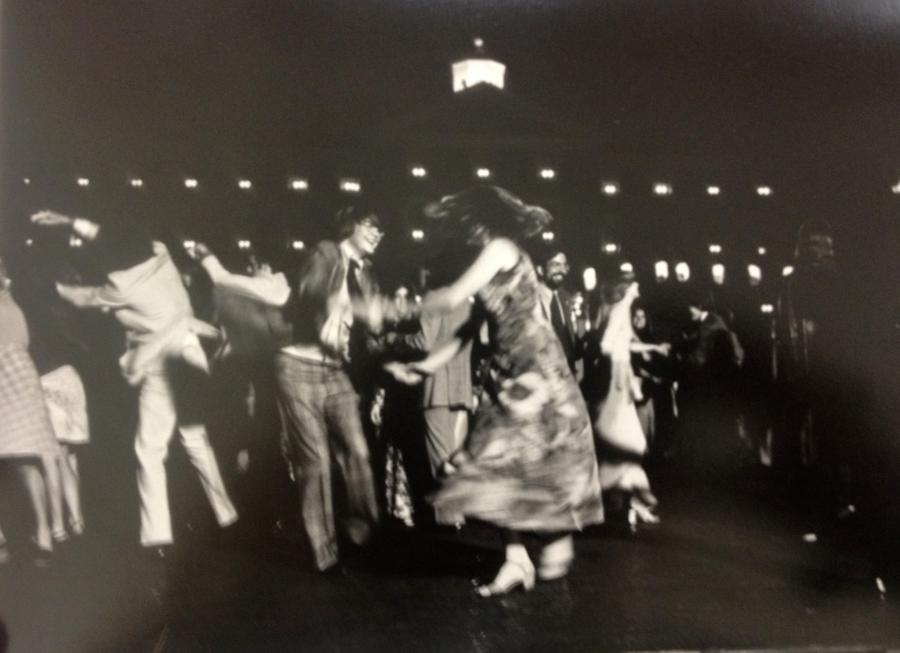 A happy couple dances among a crowd of students at Campus Dance, 1981. 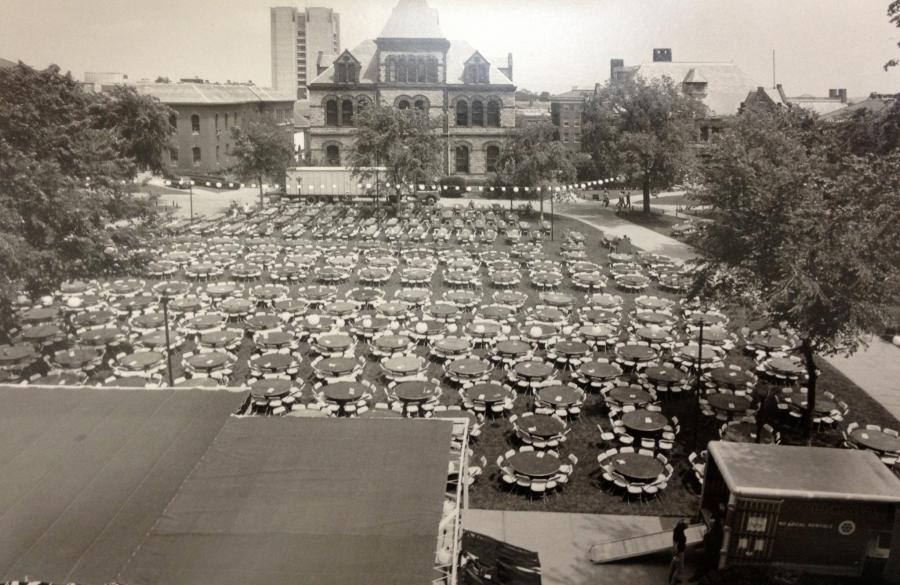 Tables and chairs are set up on the College Green in preparation for Campus Dance. Photo taken from University Hall looking east towards Sayles Hall with the Sciences Library in the distance, 1982. 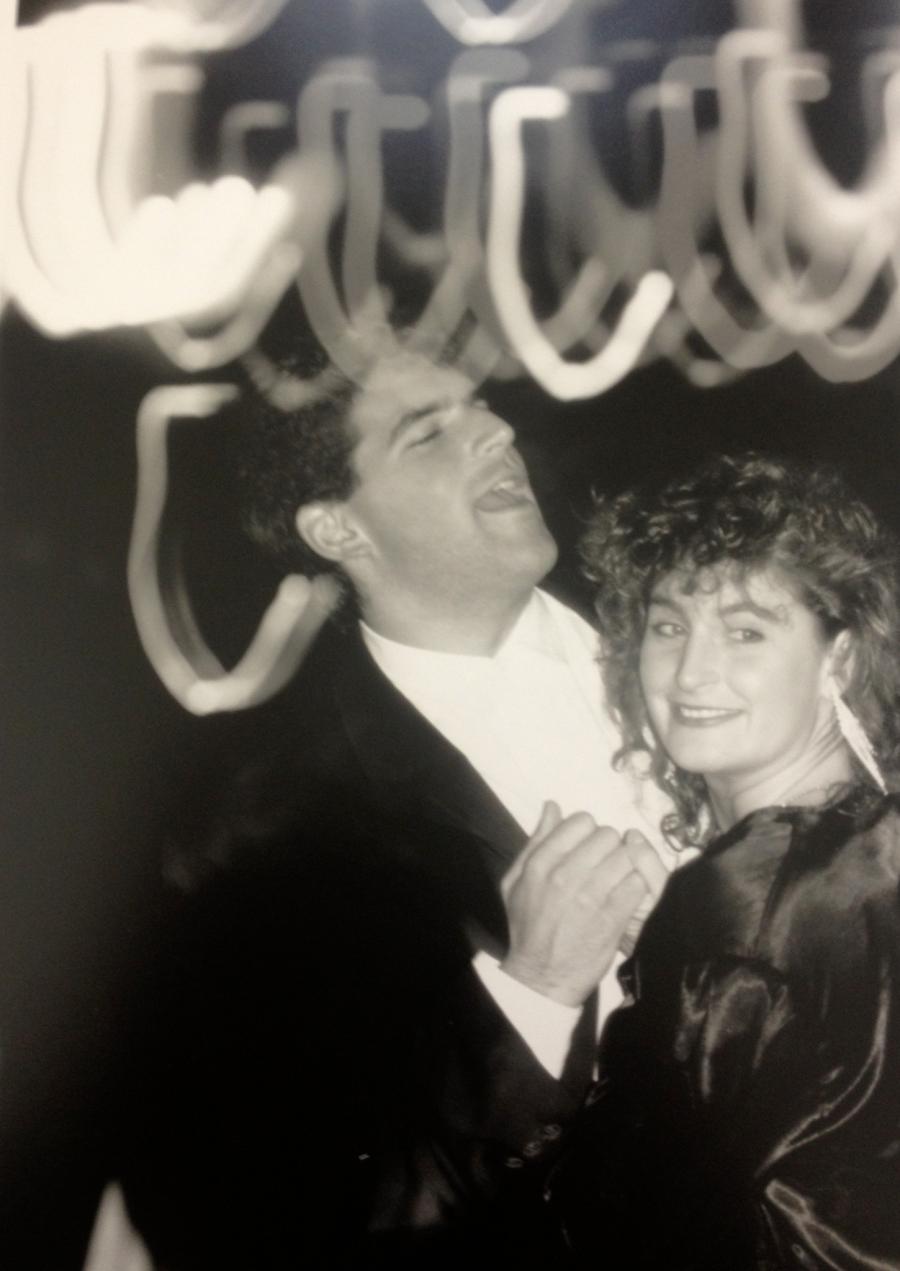 A man amuses his dance partner by singing along to the music at a Campus Dance during the 1980s. 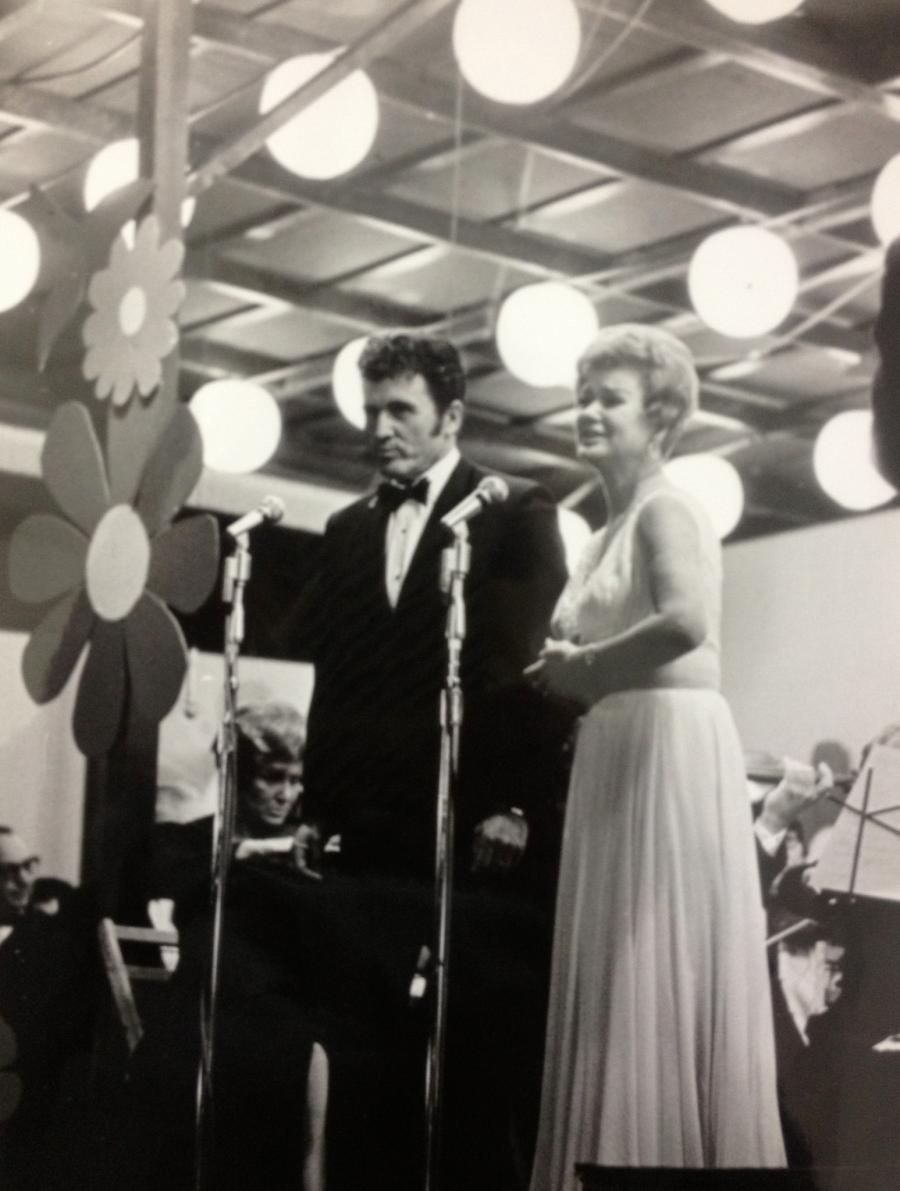 John Raitt and Martha Wright perform at Campus Dance in 1968. 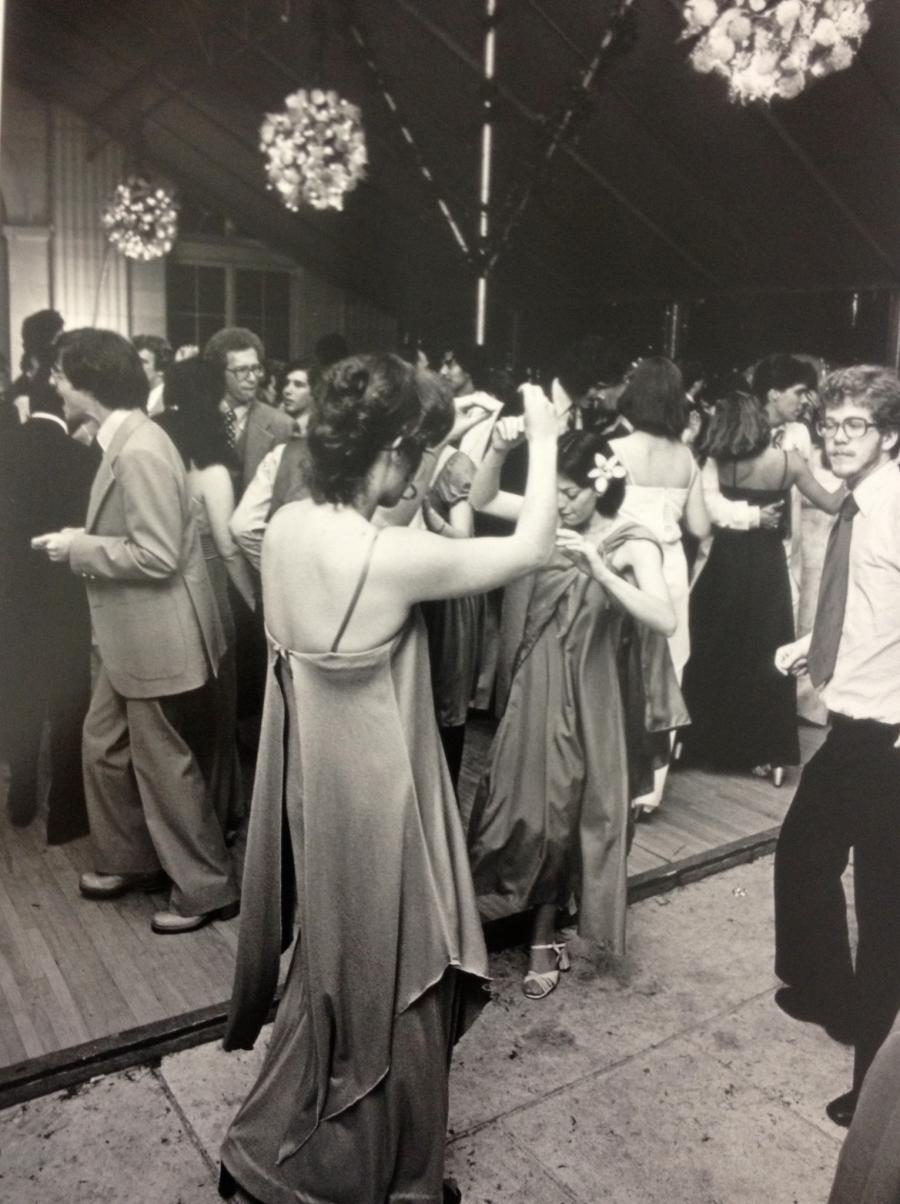 Young alumni dance under a tent during Campus Dance, 1978 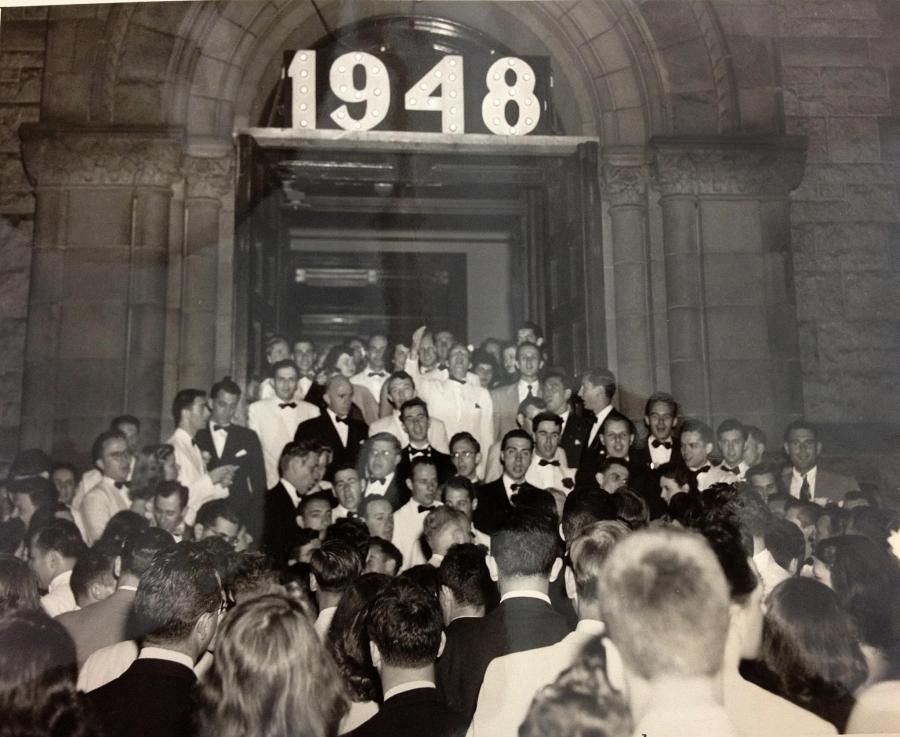 Seniors of the class of 1948 gather for the Senior Sing on the steps of Sayles Hall during Campus Dance. 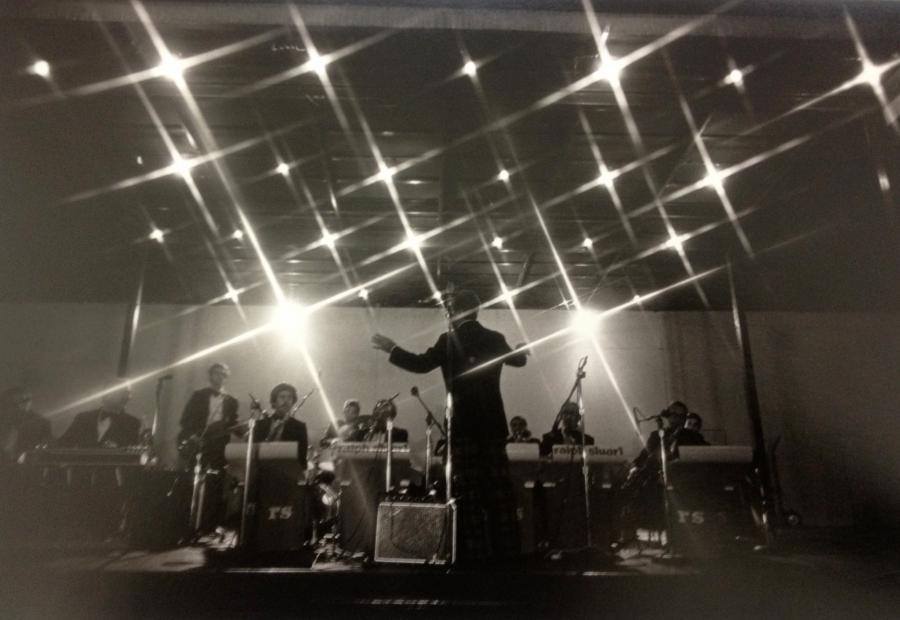 The band takes center stage at Campus Dance in 1978. 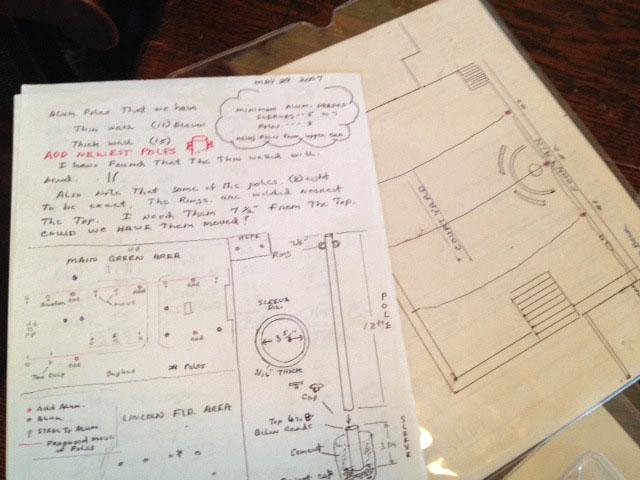 Careful planning is needed for the annual success of Campus Dance. Documents supplied by University Electrician Jeff Fugere, at Brown since 1980. 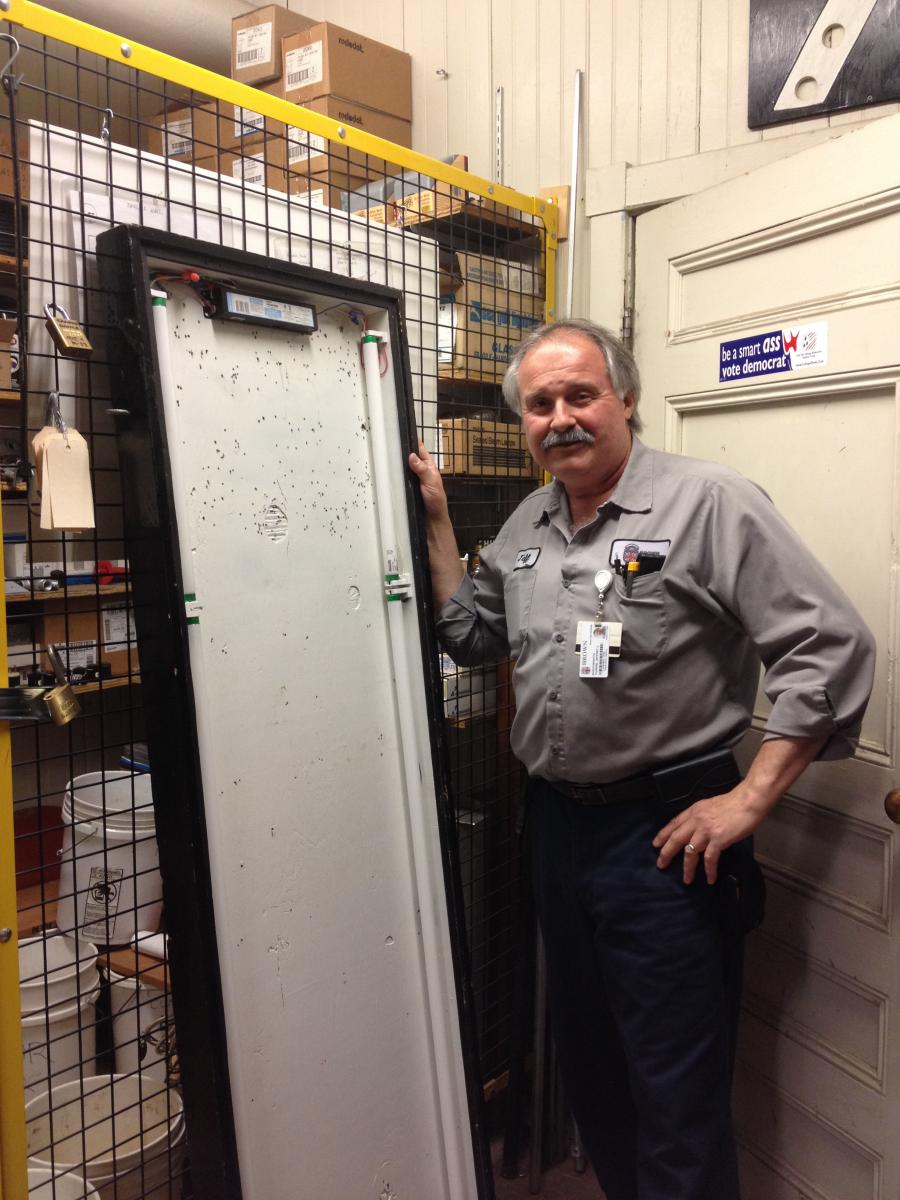 Electrician Jeff Fugere (posing with the box that hold each year's electric class year sign) has worked at Brown since 1980. On Campus Dance set-up he says: "At times it's been hard, but it's fun. We do it for the students. We put our heart and soul into it."

Celebration was again limited in 1970, when students had been striking to protest events surrounding the Vietnam War. Commencement celebrations were seen as frivolous in the face of world events and Campus Dance was replaced that year by a folk music concert. When it resumed in 1971, the audience was expanded to include reunioning alumni. In 2014, Campus Dance has become the largest event of its kind in Rhode Island and among the Ivies and has grown to become a beloved tradition for alumni and students.

“Returning to Campus Dance after 18 years, I was struck by the students’ faces: I felt like I could see my friends in them, which transported me right back to that magical night my senior year.”

Today, Campus Dance draws record crowds; in 2014 more than 14,000 guests attended, in attire ranging from jeans and t-shirts to tuxedos and ball gowns. Adding to the traditional strains of big-band jazz, student bands inject a new sound.  It is no small feat pulling it all together. Crews work around the clock, putting up and taking down 500 tables, 5,000 chairs, and more than 450 paper lanterns.

“Campus Dance is magical. The care, planning and physical labor that goes into transforming the College Green into a fairytale land is such a point of pride for all of us. Twilight falls, the paper lanterns glow in the warm colors of sunset. I look at University Hall, the stage, the people...Brown. We give you our best.”

“I was introduced to Chuck [Charles Isherwood, Class of 1944] at a reunion cocktail party. When he found out neither of us had been to Campus Dance before he said, ‘How would you like to have a dance tonight?’ Well, to think, after all these years…how delightful! How often do we talk now?…every day of the week!”

–Shirley Burr Darling, Class of 1944, on beginning an enduring friendship at her 50th Reunion in 1994

Emotions run high as Seniors, alumni of all ages, faculty, family and friends join under the stars (and the paper lanterns). Connections are made, students and professors share stories, crushes finally kiss, couples get engaged and long-lost friends reminisce. Seniors prepare to say goodbye to the friends that were like family and the campus that has become their home.

The night ends, as it has for decades, with the Senior Sing–renditions of Brown’s Alma Mater and other favorites–sung from the Sayles steps at midnight, as the new day dawns.

“Campus Dance is a wonderful experience, and a beautiful way to begin the transition from being Brown students to becoming Brown alumni. It is one of the few experiences that almost all Brown graduates will share regardless of their class year.