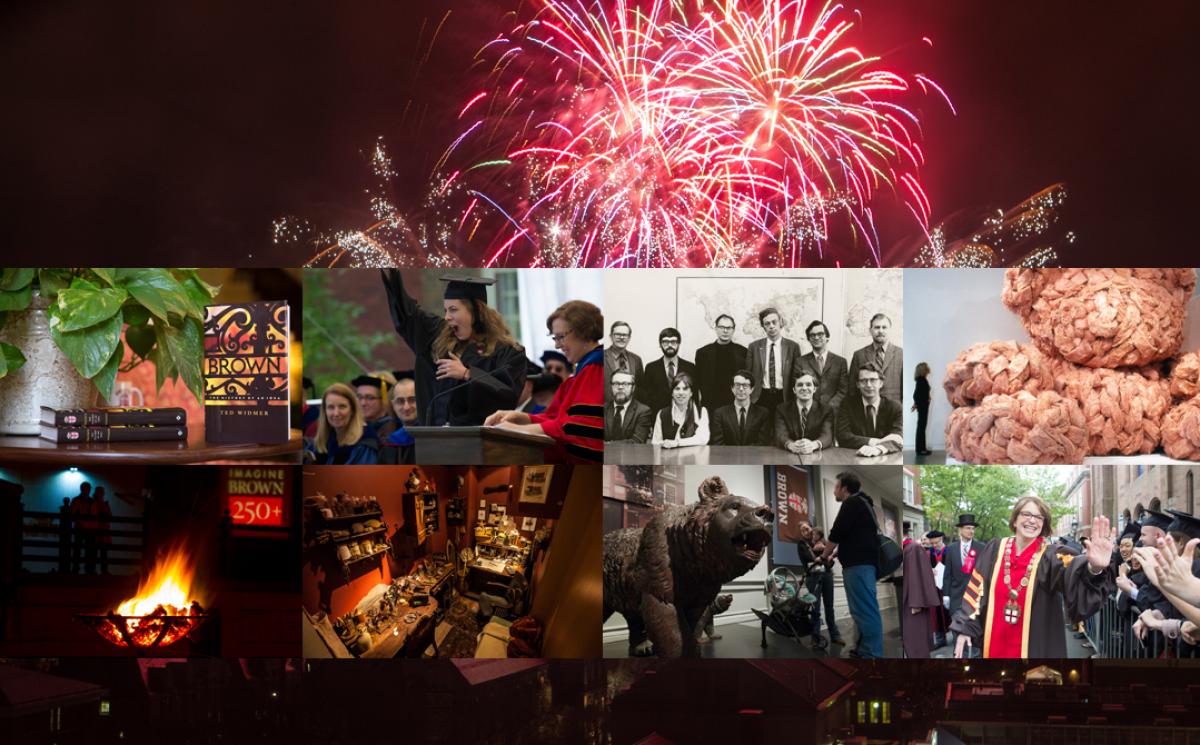 Home > About > Closing Celebration
< Back to About

On Sunday, May 24, 2015, in conjunction with the 247th Commencement and Reunion Weekend, Brown marked the conclusion of Brown’s 250th Anniversary celebration. Many institutions celebrate over an academic year. True to its nature, Brown followed a different path and marked the occasion of its founding over the course of 444 days. Thousands of alumni, students, parents, community members and friends contributed to and participated in hundreds of programs offered on campus and throughout the world. Brown’s 250th has indeed been a global celebration.

The finale included a diverse range of offerings designed to be meaningful and memorable, whimsical and scholarly, inclusive and reflective, and most importantly, true to Brown.

Campus Dance is fabulous every year. The only way we could think to improve it was by adding a special midnight moment. The fireworks, staged from the roof of J. Walter Wilson, were visible from all Campus Dance venues and launched just after midnight following the traditional Senior Sing.

2. A New History for Brown

In May 2015, Brown: The History of an Idea, by author and historian Ted Widmer, was released. Ted discussed the book during a forum. The Brown Bookstore also held a book signing. Read an excerpt.

In celebration of the 250th Anniversary, the David Winton Bell Gallery and the Department of Visual Art created a series of solo alumni exhibitions presented over the duration the Anniversary. The final exhibit in the series was Dave Cole: American Lullaby, featuring the work of Dave Cole ’00.

4. In Deo Speramus: The Symbols and Ceremonies of Brown University

In March of 2014, the Haffenreffer Museum of Anthropology launched this significant exhibit. The objects featured create a rich perspective on the University’s unique history, values and identity.

Brown’s Museum of Natural History and Anthropology was founded in 1871 by John Whipple Potter Jenks. Though most of the collection was destroyed in 1945, The Jenks Society for Lost Museums (comprised of students, faculty and artists) set to rebuild the spirit of the museum in celebration of the 250th.

The Pembroke Center re-examined Louise Lamphere v. Brown University, the landmark class action case that in 1975 charged Brown with sex discrimination and set in motion a chain of events that changed Brown. Visit the exhibit in Pembroke Hall.

At the foot of College Hill, floating bonfires set the night sky aglow throughout Waterplace Park. This spectacular installation and unique Providence experience was created by locally based artist, Barnaby Evans ’75.

The procession is one of Brown’s greatest traditions. A record crowd of graduates, faculty, dignitaries and alumni walked through the Van Wickle Gates and down College Hill, the center of which was striped in red, white and brown.

The conclusion of the University Ceremony on the College Green officially marked the end of Brown’s 250th Anniversary with the performance of Alma Mater 250.

A more comprehensive overview of the 250th Anniversary is available here.