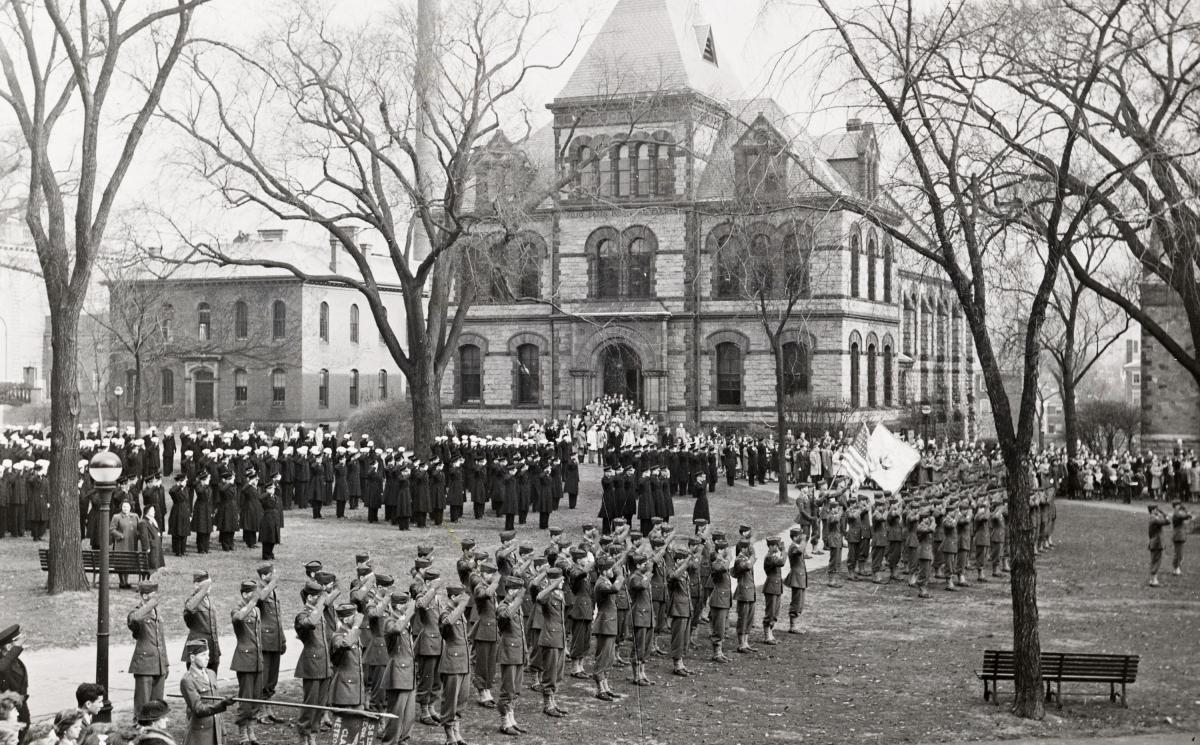 Echoes of the Past Ringing Today

Founded on the eve of the American Revolution, Brown University (then called Rhode Island College) has served as a place of learning and employment for both veterans and those who would go on to serve in the military. The presence of their stories on campus is not always evident to those passing by. In honor of Veterans Day and our veterans, we shine a brighter light on these important stories contributing to Brown's 250-year-old history.

On campus, many of us regularly make our way through a most impressive monument: the Soldiers Memorial Gate. Built to honor the 42 Brown community members who lost their lives in World War I, the monument is dedicated: “To the men of Brown who in the World War/ Gave their lives that freedom may endure.” And just steps away there are other, less visible, monuments to those who served.

Just inside the gate on the Ruth J. Simmons Quadrangle (formerly Lincoln Field) sits the War Memorial installed in 1997 to honor the 205 Brown alumni who died in World War II, Korea, and Vietnam. A bronze trellis with climbing roses softens the square granite and marble blocks. The poignant inscription reads: “Here we remember each of them/ Our friends, classmates, and students/ Their voices stilled/ Their futures lost”.

Although the celebration of Veterans Day dates to the recognition of the armistice at the end of World War I, Brown’s connection to the military and wartime goes back nearly to its founding. The exterior wall of University Hall, the oldest building on campus, hosts a plaque honoring the Revolutionary War service of Brown faculty, students, and alumni. With British troops landing in Newport, the campus was commandeered in December 1776. University Hall (then the College’s only building and called the College Edifice) served first as a barracks for Continental troops and then as a hospital for French soldiers. The building needed extensive repairs when it was handed back nearly six years later when classes resumed in 1782. Inside nearby Manning Hall, a plaque honors the 21 Union soldiers from Brown who died in the Civil War (in all, 294 alumni and students served in the Union ranks and 24 in the Confederacy).

Next to Hegeman Hall, a plaque recognizes the post-World War II creation of the Veterans College at Brown (see an in-depth account of the Veterans College here). After the war, Brown accepted nearly 500 men and women encouraged by the G.I. Bill to pursue college studies through this special program. Exceeding expectations, almost all of the students went on to pursue full degrees, with 142 pursuing their degrees at Brown (three of those at Pembroke). 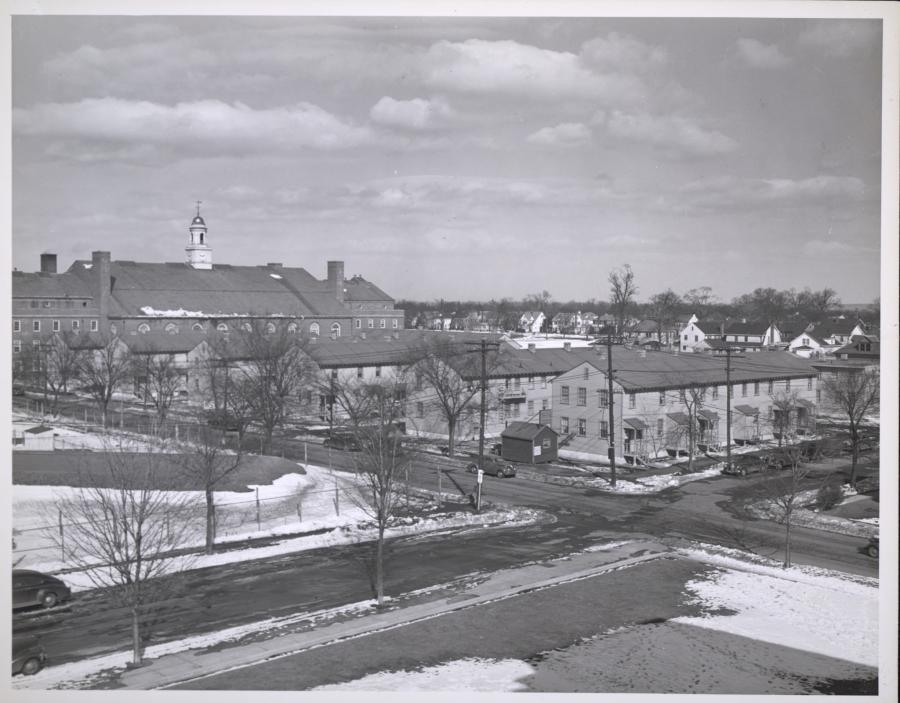 To accommodate the influx of veterans to the college, temporary housing was built on land next to Marvel Gymnasium (the site of today’s Jewish Community Center) to house veterans and their families. The official Veterans College was established the following year. 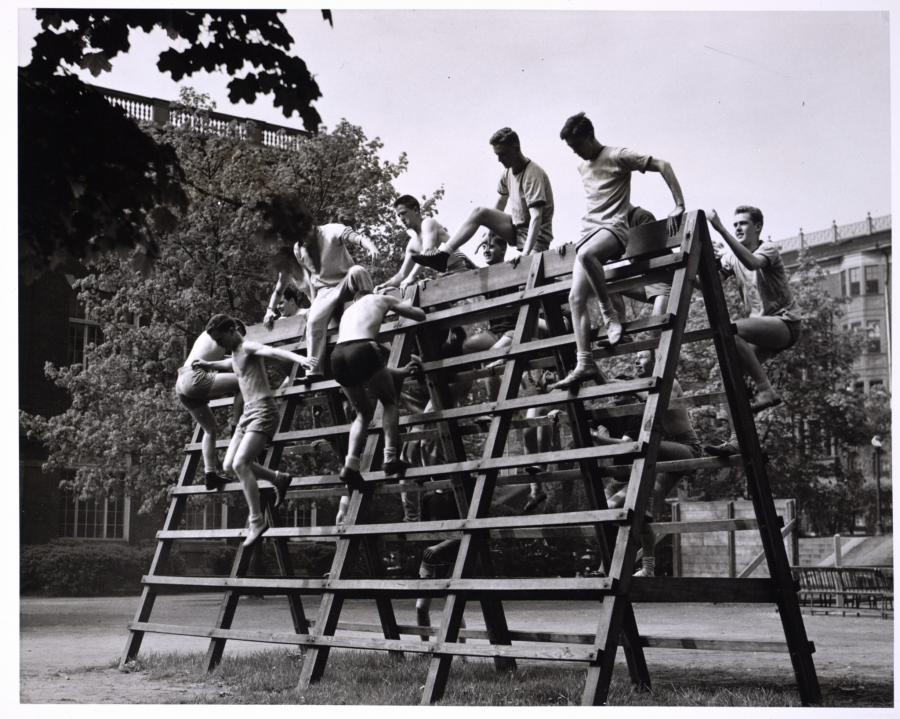 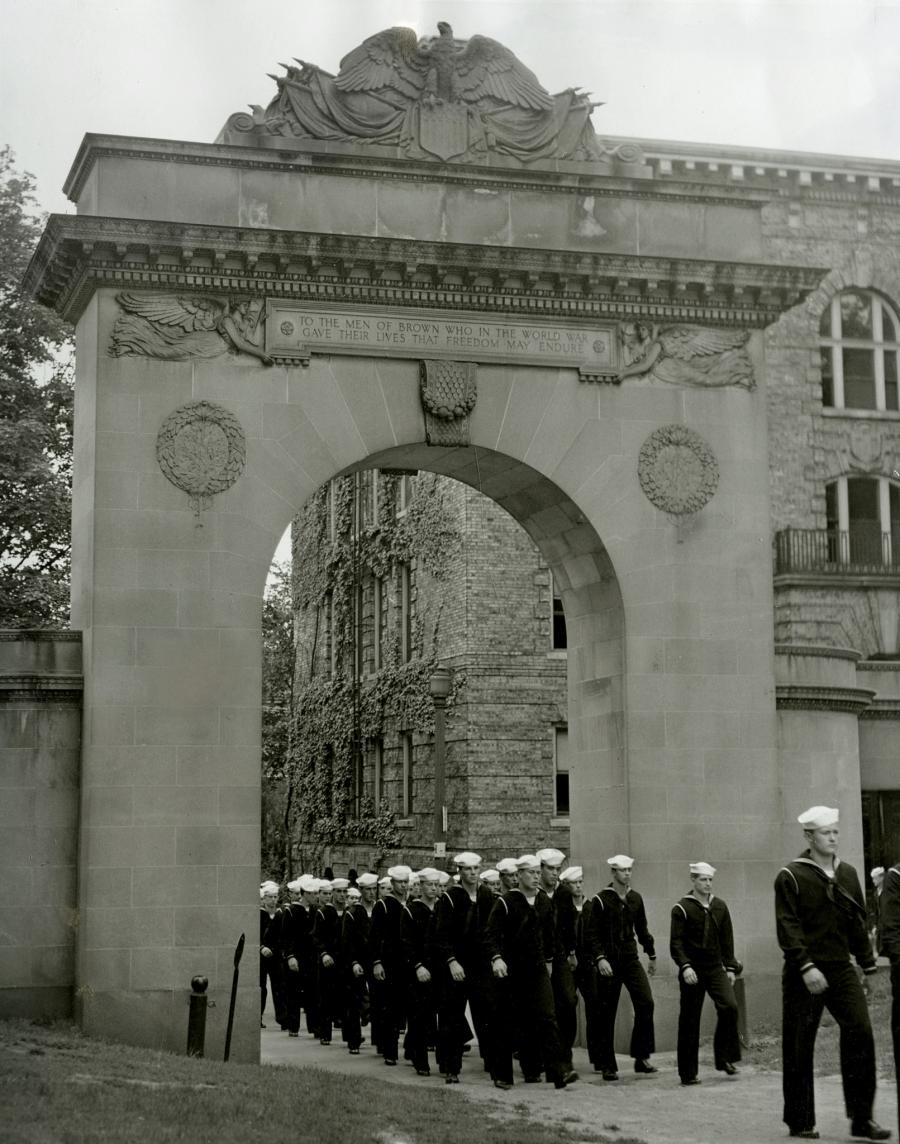 Student-sailors training for World War II service march through the Soldiers Memorial Arch honoring those who died in World War I. 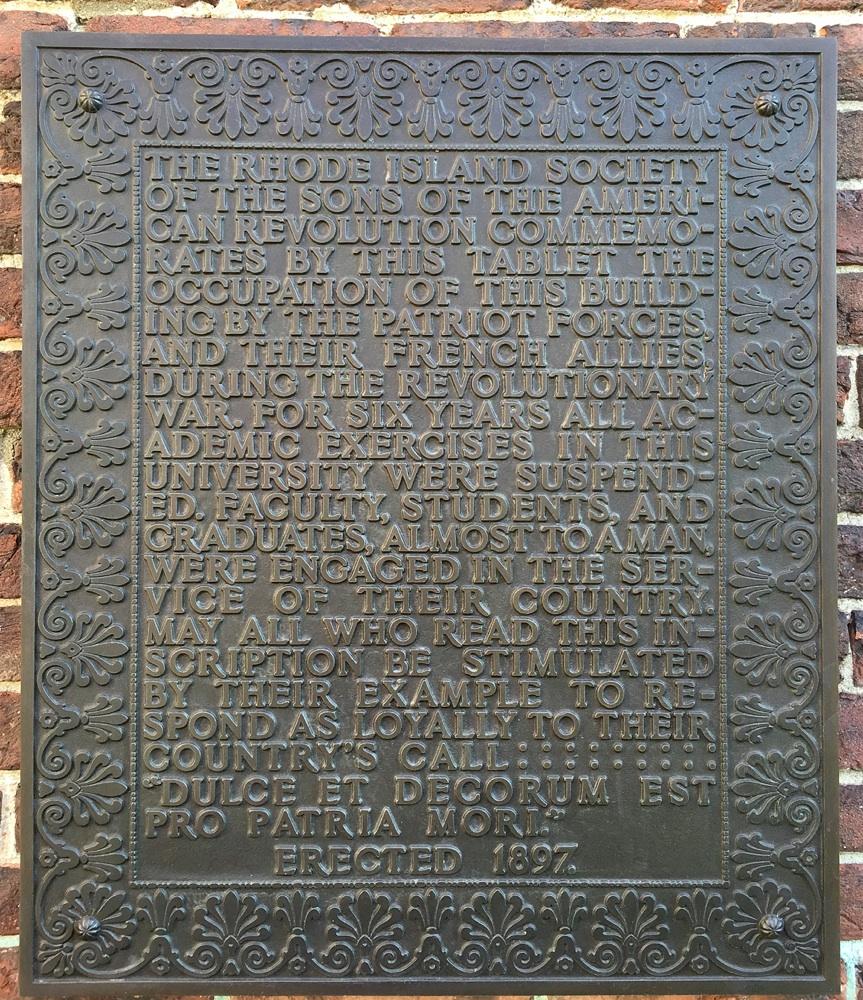 This plaque on the side of University Hall honors the many Brown students, faculty, and alumni who served in the Revolutionary War and exhorts the reader to: "...be stimulated by their example to respond as loyally to their country's call." 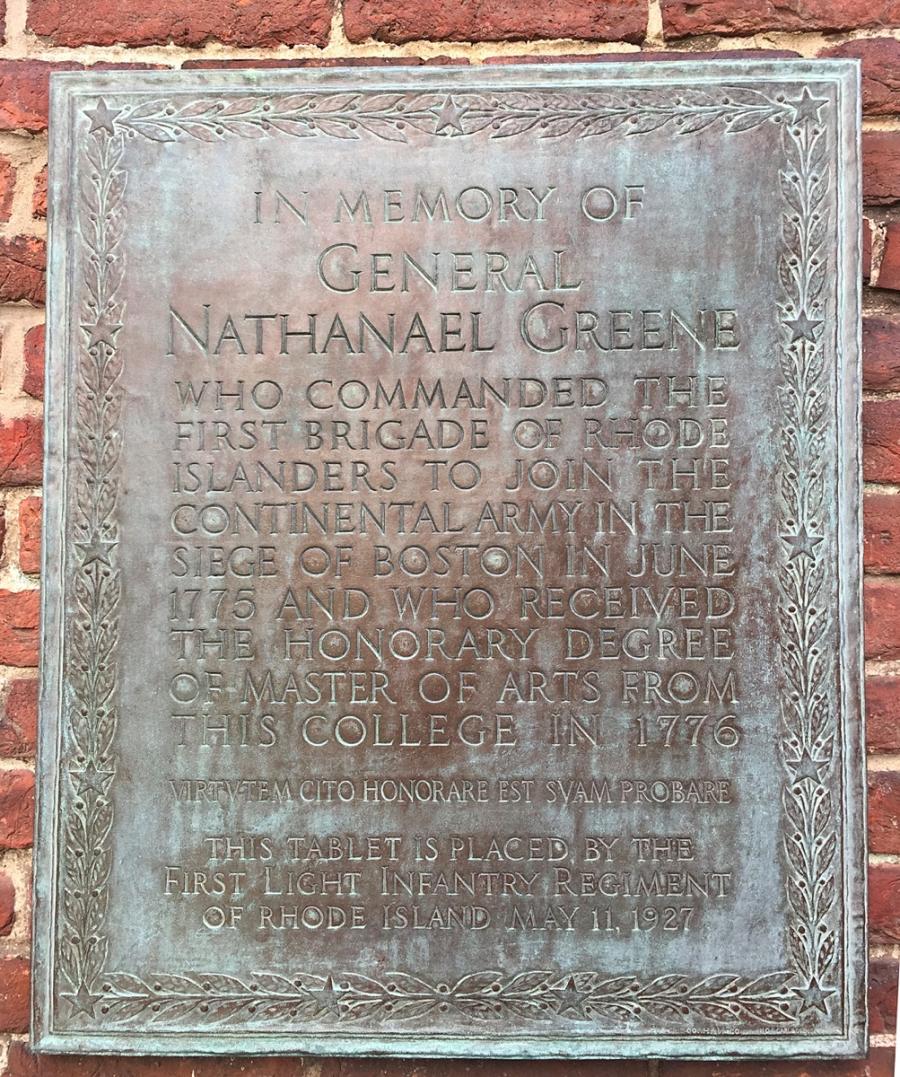 Plaque on the side of University Hall honoring Revolutionary War General Nathanael Greene, who received an honorary degree from Brown in 1776. 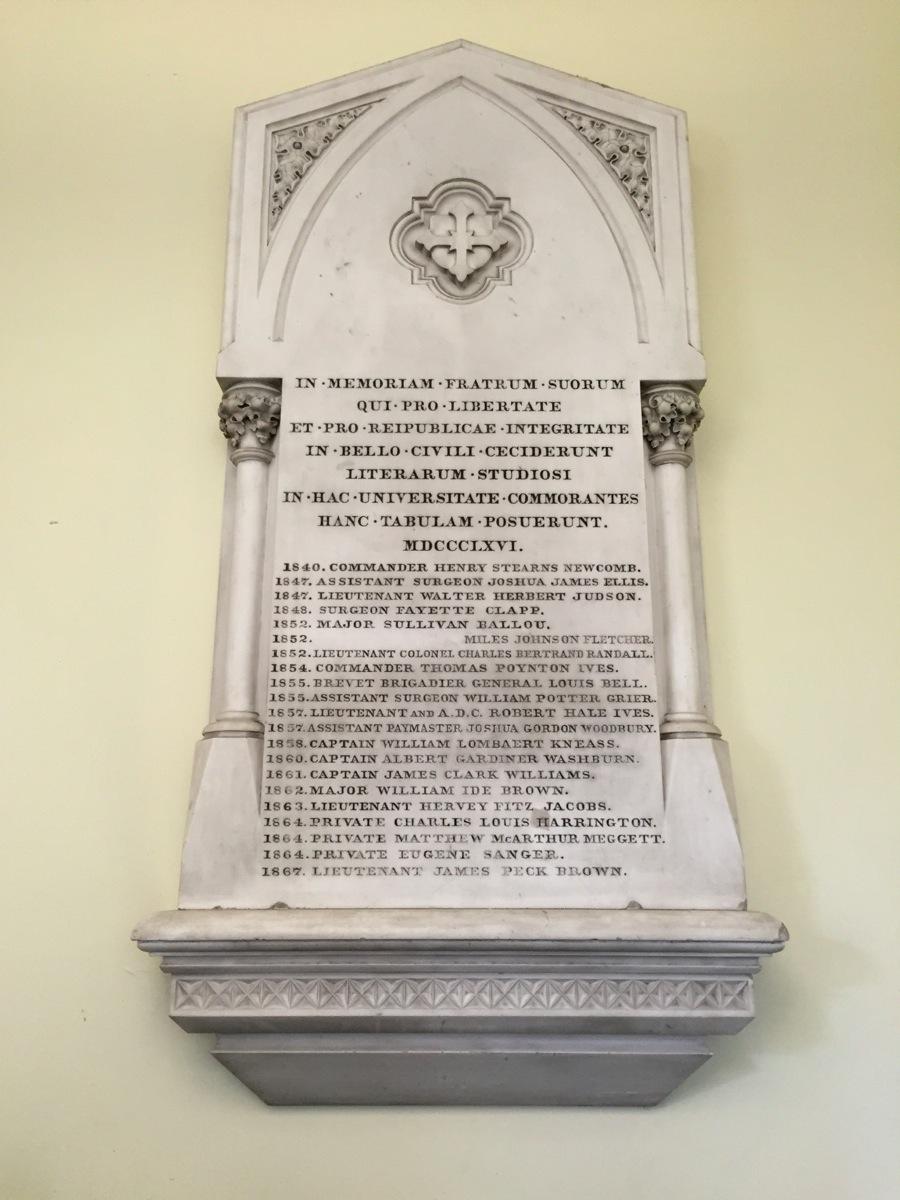 By the end of the American Civil War, 294 alumni and students from Brown had served in the Union ranks and 21 of those men had died. In 1866, this tablet in memory of those who perished was dedicated and installed in Manning Hall. 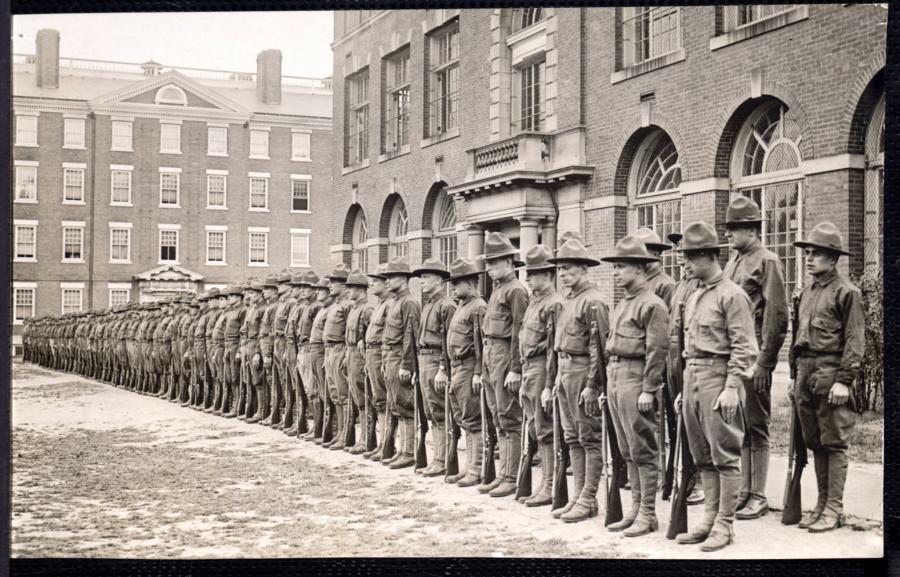 Members of a U.S. Army training unit assemble in front of the Lincoln Field Building in 1914.

Armistice Day 1943 on the Brown University campus. Shown here is the Brown Army V-12 Unit on active duty and the Army Air Force Pre-Meterological Detachment, C-Unit. In the background are Sayles Hall and Rogers Hall. 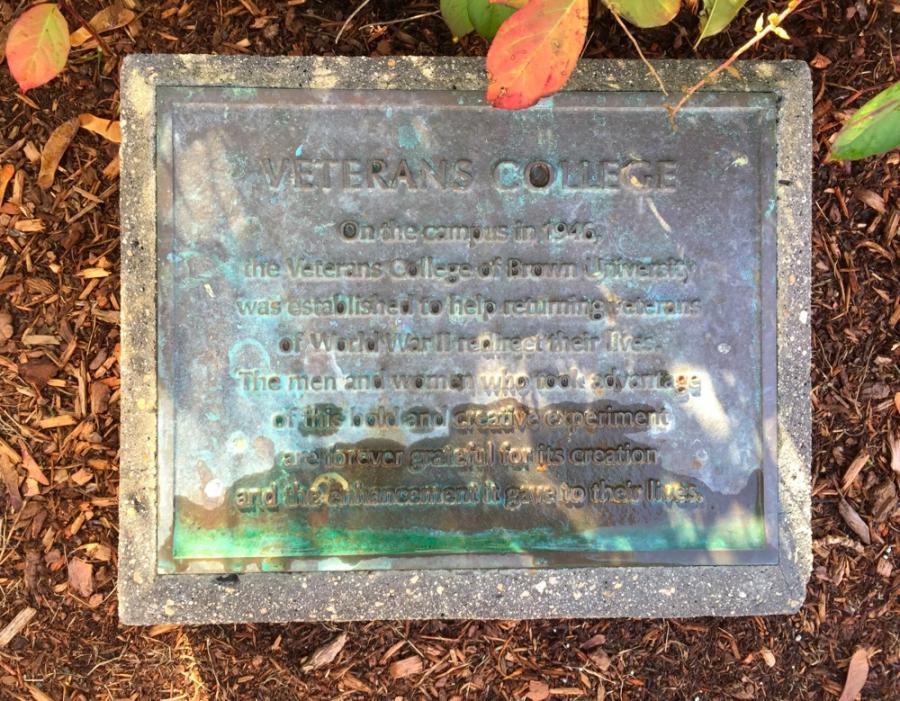 This modest plaque, located under a tree next to Hegeman Hall, expresses the gratitude of those who attended Brown's Veterans College after World War II.

Nearly any walk through campus crosses paths with the places that soldiers and sailors trained at Brown to serve their country. During World War I, the majority of the student body consisted of enlisted men on active service and the University adopted a War Department-approved curriculum. During World War II, the campus again became a military training ground and studies proceeded at an accelerated pace to prepare men for war:

The armed forces need a steady flow of educated personnel. To this end, the Secretaries of War and of the Navy have issued a joint statement which first emphasizes that the country can no longer afford to have young men proceed with their education at the regular tempo, and second, urges those who are willing to put forth an intensive effort to continue in college.

However, one story that is not told in monuments or plaques is the controversy surrounding the presence of military training on campus that emerged in the 1960s. Previously, the University adapted to wartime. Brown closed due to the all-encompassing nature of the Revolutionary War and sent a large portion of its students and faculty to fight in the Civil War. During World Wars I and II, the University was transformed to accommodate the country’s need for trained service members. During the Korean War, it was designated by the government to host Air Force Reserve Officer Training Corps (ROTC) units. However, during the Vietnam War, the national sentiment shifted toward antimilitarianism. Students and faculty, unhappy about the war, also objected to the presence of ROTC activities on campus. In 1969, the Brown faculty passed a set of resolutions that would result in the permanent withdrawal of Brown University from credit-granting participation in ROTC.
Today, Brown students interested in serving as Commissioned Officers can pursue several different commissioning programs, including the U.S. Army Patriot Battalion at Providence College.

The stories of Brown’s veterans are as varied as the veterans themselves. Some left Brown to fight a popular war, others to fight an unpopular one. Some served their country in the Army, Air Force, Navy, or Marines and then returned as RUE (Resumed Undergraduate Education) students. Others served and then came to College Hill as staff members, some of those staying at Brown for decades.

Explore their stories below: 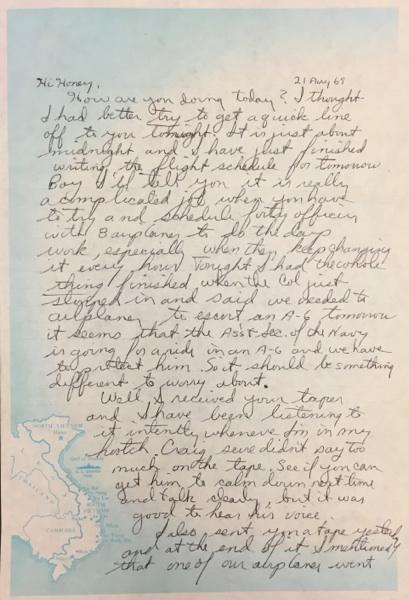 In this August 1969 letter to his wife, Captain Jerry Zimmer '66 describes his daily life and responsibilities serving in Vietnam. He also thanks his wife for sending an audio tape of their son, Craig. The letter, along with many others from Brown alumni in Vietnam, resides in the collection of the University Archives. The collection also includes a letter to Mrs. Zimmer from the Commandant of the Marine Corps in October 1969 expressing his condolences for the death of her husband. 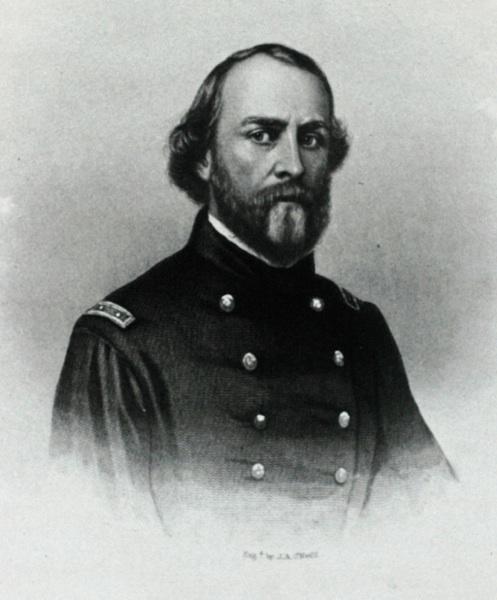 Sullivan Ballou, a member of the Class of 1852, was one of the earliest victims of the Civil War. A native of Smithfield, Rhode Island, Ballou served as a senior officer in the 2nd Rhode Island Infantry Regiment. He was hit by a cannonball during the First Battle of Bull Run on July 21, 1861 and died of his wounds a week later.

Before the battle, apparently sensing his coming demise, he wrote a letter to his wife Sarah “lest I should not be able to write again” that has become one of the most famous letters of the war. 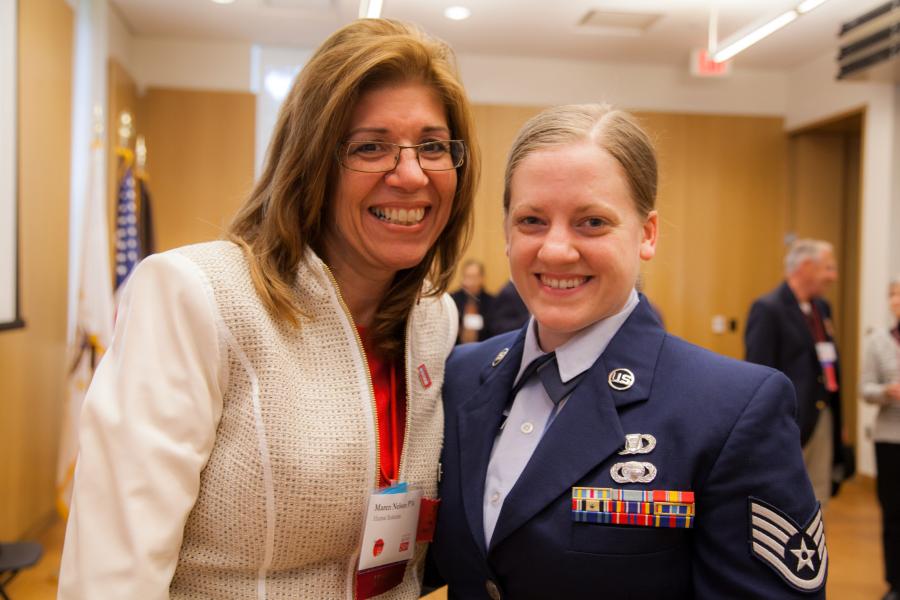 Graduating student veteran Lauren Rouse ’14 poses with Maren Nelson P’15 at the Military Veterans Reception and Graduation Recognition held by the Office of Student Veterans and Commissioning Programs. Lauren served in the Air Force prior to coming to Brown as a RUE student. Since graduating, she has returned to the military full-time.

On her experiences she says, “My first few years in the Air Force introduced me to a world beyond my own, and that's an experience I hope to repeat many times in my life. My foray into the realm of academia has certainly fit the bill. Perhaps the most valuable thing the military has given me is a love of languages. I'm very fortunate to have developed a skill that is both personally and professionally enriching. One of my favorite poets, Henry Wadsworth Longfellow, summed it up perfectly when he wrote that language study ‘is like being born again.’ I couldn't agree more.” 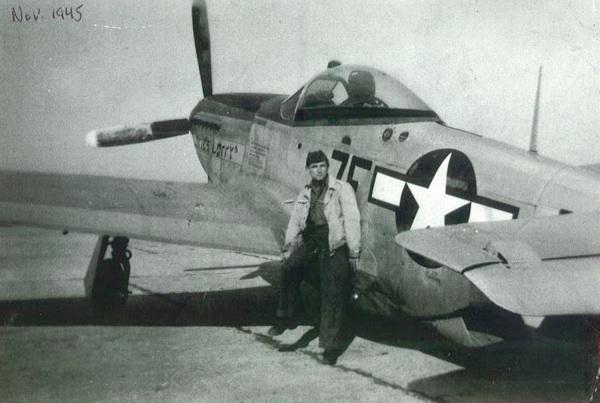 Stanley Wyrostek poses during his U.S. Army service with the 45th Infantry Division in Europe in November 1945, just after the end of World War II. Mr. Wyrostek came to Brown soon after the war and would work as facilities staff for 42 years, where one of his responsibilities was keeping the fire alarm system running properly.

His daughter, Ginny Twomey (also a Brown staff member, working at Brown Libraries) shares his recollections of a number of meaningful moments during his time at Brown:

“Stanley started in the Grounds Department at Brown in 1946, not long after he got home from the war.  He wore his army uniform to work.  His supervisor, Mr. Davenport, loved the way he looked in his uniform, and wanted everyone to start wearing uniforms for a more professional look!”

“He used to tape various speakers that visited Brown.  One time, Martin Luther King was visiting and my father taped his speech.  He wasn’t told to do so, he just did it because he was there and thought it was a good idea.  A few weeks later, MLK was killed, and they wanted to know where that tape was!”

“A four-star General visited Alumni Hall at Brown during the Vietnam conflict. Of course, a riot ensued and the FBI guys asked my father how they could get the General out of the building.  Pop knew that there was a trap door under the piano which took them to the floor below.  Alumni Hall was trashed, but the General got out safely!” 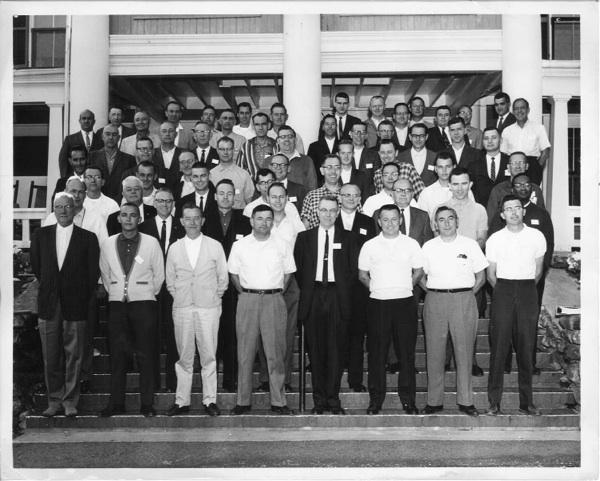 “Not too long after [my father] worked at Brown, he started taking classes to become an electrician. He learned quickly, and soon became knowledgeable about many functions at Brown ... The picture was from Fire Alarm school which Stanley attended in 1965 or 1966 in New Hampshire. Two people attended from Brown, my father, and the Supervisor of the Buildings & Grounds Department. They studied this new system for fire alarms.  After the new alarms were installed at Brown, any time a fire alarm would go off after hours, they would call him in to re-set the alarm.”

–Ginny Twomey on her father’s time at Brown

“My Brown education prepared me to be an officer and serves as the foundation for the legal advice I provide to commanders on difficult issues of international law and criminal law – tremendously demanding and challenging work,”

In 2014, there are 25 self-identified Veterans enrolled at Brown, men and women who attend the College, Graduate School, and Medical School. All are veterans of the wars in Iraq and Afghanistan. This year, as for the last five years, members of the Brown community, Brown’s President, and members of Rhode Island’s legislative delegation will gather for a procession and ceremony to honor those from the Brown community who have served and sacrificed.

“We would not enjoy the freedoms and opportunities that we do today were it not for their dedication to the greater good.”